You are here: Home / Beauty / The Makeup Show | Haul
I’ve been traveling like a madwoman for the last week or so but I somehow managed to find time to stop by The Makeup Show. I didn’t anticipate going but I decided to check it out since I was in town. The show in Atlanta was a little smaller than the L.A., Dallas, and NYC shows. The site listed the show as a pop-up event.
I wasn’t able to purchase a ticket online but was able to buy one at the door without a problem for $28. I believe this one was cheaper than the others because of the size. Oddly, I still managed to wear myself out. By the time I left my feet were killing me. LOL! 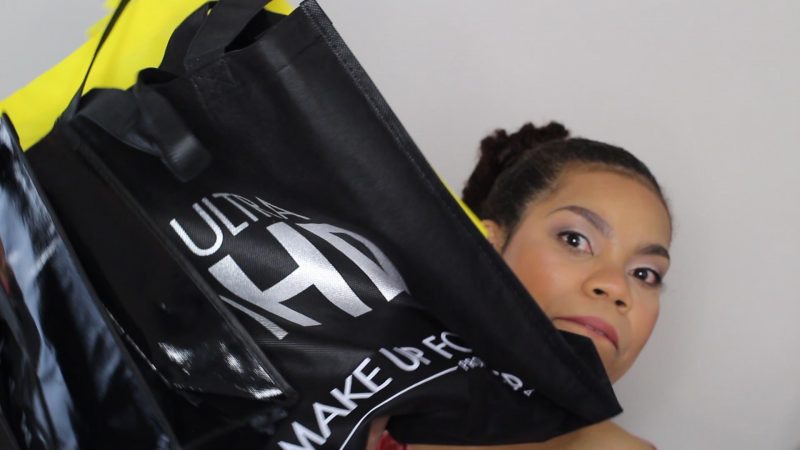 I picked up a few great items at awesome prices. I’m seriously surprised that I managed to stay on budget but then again, I am cheap as hell so… LOL!
I love the Bdellium brushes that I grabbed. After I looked at my receipt, I realized that I spent $27. The brushes are super soft and I’m really looking forward to trying the blending brush for highlighter. That was seriously the last thing I bought before I left. I couldn’t get it off my mind, so I went back to the booth to pick it up. I’m just bummed about the poor service I received while I was at their booth. The two people working the booth were too busy talking to each other the first time I was there and never acknowledged that I was there or needed help. I had to break into their convo to make my first purchase. The second time I went back, the young lady damn near knocked me over and my purse out of my hand after she cut in front of me when I was at the table trying to find the blending brush. It was so bad that I actually had to say something which isn’t normal for me. Normally, I would have walked away and not bought or said a word but after being there twice and the service sucked… But the brushes are the bomb!!! Don’t get me wrong, I’m not bashing Bdellium based on this event. I will still buy their products. Hopefully, the next time will be better. 🙂
The NARS booth was jammed packed! They were one of my two favorites experiences of the day. LOL! The funny thing was when the rep gave me my total. She said $58 whatever. I had to make sure I heard her correctly but she pulled up the scan log and it was right. I told her, “Let me hurry up and give you my money!” I knew the foundation had a discounted price but I didn’t realize that it was only $33.50. I couldn’t give her my $60 fast enough. LOL!
We won’t talk about the makeup brush heaven I was in at the Crown Brush table. Have mercy! I went to get the concealer brush and a face brush. The other two brushes just kinda found their way into my container. 🙂
I’m super excited to try the Temptu Pod and it’s one of the items coming out in August. I seriously wanted to break out in the running man when he showed it to me. Seriously, I didn’t hear all of what he said because I was so focused on buying the pod for my highlighters.
The RCMA Powder was $10, not $6 but hell, it is cheap as hell compared to Laura Mercier. I can’t wait to see if it really compares to my LM powder.
I had too much fun at the Makeup Forever booth. For some reason at MUFE and NARS, it was the guys that helped me and had me cracking up. Both were super helpful! It took us a few to find my color in the new MUFE Water Blend Foundation. I noticed a guy standing off to the side watching us find my shade. He actually stopped me on the way out because he wanted to know what shade I ended up buying. Like for real y’all, I felt super shocked at how light of a shade I needed at MUFE and NARS. You know it’s bad when other people chime into the convo and hold their arm up to yours to prove that you are super light. LOL
Anywho, I had fun and I found some awesome items. I’m most looking forward to the MUFE foundation. He did tell me that if I want a sheer/light coverage, I need to use a sponge. However, if I want medium coverage to use a brush because the brush bristles will pull some of the water out of the foundation and leave more pigment at the head of the brush.
I’m seriously looking forward to the NYC show next summer.