In a previous Manicure Monday, I discussed removing my nails and trying the Julep Oxygen Nail Treatment. It was time to give my nails a break and they were just too long. I thought I wanted to grow them long again, but I quickly realized that I can no longer function with long nails. Some things just have to stay in the past…biker shorts, fan ponytails, and super long acrylic nails.

So the plan was to take them off and try the Julep Oxygen Treatment for the entire month of January. I took the nails off a few weeks early, but the plan is the same. Since the Julep treatment works best without other polishes, I will not be able to do nail art or polish my nails.  Due to the instructions on the package, Manicure Monday is on a break until February 3rd, the first Monday of the month.

Right now, my nails are really thin! Each time they grow out just a bit they break. I’ve had them split so far down that they bleed. Last week, I had three nails (one on the hand pictured below & two on the other) that hurt even when I wasn’t touching them. Oh, I was Miss Cranky Pants for sure! 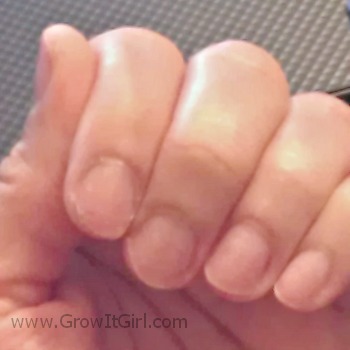 Sorry about the picture quality. This was a picture I sent to a friend and didn’t intend on posting it. You can see I’m working with nubs here! LOL! I’m on a break and my nails broke!!! Anywho, my goal at the end of my break is to have healthy and strong nails. Check the previous post about the Julep Oxygen Nail Treatment to know if it’s worth the money or not.

I want you all to show off your mani’s while I’m on a break. Post your pics on the Julep Oxygen Nail Treatment.

Previous Post: « What Are Wild Growth Hair Oil Ingredients?
Next Post: Top 5 Hair And Beauty Posts of The Year! »